Winter was winding down! Green grass was getting close and soon old robin redbreast would be hopping around catching worms announcing better days ahead. And one of the things that it meant was, warm enough to sit on the front porch, hear great stories and watch all the critters scurrying to and fro. After all these years, I can still close my eyes and feel the sun on my face, hear the melody of that old cane bottomed rocking chair keeping pace with words to live by.

He always said he was the rocking chairman of the board at his house. And I guess he was exactly right. It had been so cold for so long that we hadn’t been able to sit down and do some serious rocking and thinking in a while and today was the day. He told me one time with a twinkle in his eye, “A man can’t accidently be as obfuscating as I am. It takes a passel of thinking”. I had to look that up when I got older. I remember my auntie got on to me once for saying that at home. She said to me, “I don’t know what it means honey, but it just don’t sound nice.”

Dillard stretched real big as he stepped on the porch. He had the look of a King about to be coronated. He paused and stared at the rocking chair. He moved it slightly and slowly sat down. He allowed it was important for a man of his breeding and years to rock with the grain so as not work himself to death rocking uphill.

Tales of long coon hunts and twisted trot lines whiled away the next couple of hours. We were interrupted by an old fox squirrel fussing at us for being outside and too close to his tree. We sat there quietly for several minutes just enjoying the sounds. There were birds chirping, squirrels barking and leaves rustling as the dying winter wind made one last gasp.

“Tell me son, what do you want to do this year,” Dillard asked me almost as an afterthought. “Bat first,” I said. “Bat first? What does that mean?” he asked.

“Well, you know when all of us kids play baseball on Saturday and sometimes after school?” He nodded quietly. “Dumb old Tommy is the only kid with a real bat. When he gets here, we always choose sides. He pitches the bat in the air to me and I catch it. We put our hands on the bat and whoever is the last one to grab the bat by the knob and can throw it 10 feet over his shoulder gets to bat first,” I explained.

He answered back, “Sounds fair to me.” “Sounds fair, ain’t fair,” says I. “If he wins, he bats first. If he loses, he says that if he can’t bat first, he’ll take his bat and go home. I wish I had a bat and then I’d show him.” I whined. He rocked back and forth what seemed to be forever before saying, “Why would that bother you? Hang in there and it will get better.”

“How can it get any better?” I asked unconvinced and still whining. He kept on rocking. I think he was doing it just to make me sweat. “Well, you can let him bat first and beat him anyway,” he said and started rocking again. “Or if you win the bat toss, tell him he’s got to bat first, because this year only losers bat first.” On the inside I said, “He’ll beat me up.” But on the outside, I said, “That won’t work.” 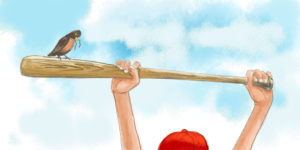 It was obvious he was thinking harder than he was rocking now. “Or” he paused and said, “you could tell him to go home and use your bat.” Half sad and half mad I said, “You know I don’t have a bat.”

I hadn’t even noticed Dillard walking from his throne to the front door. He opened the screen door and reached inside the house for something. He turned and said to me, “I had some time on my hands this winter.”

In his big old, scarred hands was a bat cut straight from the heart of ash tree that he’d found earlier in the year. I’d seen him working many times with his wood rasp and knife turning nothing into something. And I instinctively knew why he did it for me. I felt tears streaming down my face as I took the bat into my hands. It was the most beautiful bat I’d ever seen. For some unexplained reason, while I felt grateful, I mostly felt unworthy to be holding something so special.

I remembered what Dillard told me when I held Tommy’s bat at the plate later that month. “Loser, Loser,” he taunted me as he got ready to throw a pitch. I scowled on the outside and shouted for the team to hear, “Shut your fat mouth, Tommy. I am not a loser!” But on the inside, I was grinning like a possum eating saw briars saying, “I wish we had a fence to knock this ball over cause it’s gonna go a long long way..”

Boy howdy, this is going to be the best year ever! And the next time we are going to play with my brand-new bat. Move over Stan the Man…there’s a new kid in town.