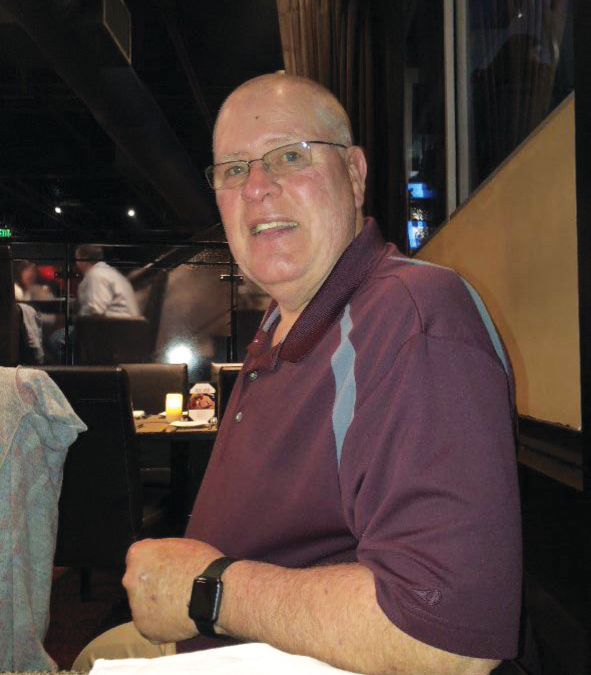 Before I tell you about our next Damage Prevention MVP, I want to stress the word passion. Merriam-Webster defines passion as a strong liking or desire for or devotion to some activity, object, or concept. To describe a man named Donny Whittaker, “passion” absolutely fits the bill.

Donny just recently retired from Piedmont Natural Gas as a supervisor at the end of 2020 after 37 years. In 1984, he called a family friend, Darrel Byrd to see if there were any openings at the gas company. Darrel gave Donny the office number to call for an interview. There he met a supervisor named Herb Ball who told him if he could pass a physical, he would be hired. Passing a physical would not be a problem. Donny came from a background of hard work instilled by his parents Jim and Betty Whittaker. He says, “We were taught how to work when we were young. We didn’t know there were lazy people around, because everyone did what they were supposed to do.” Early on, Donny and his father went into business together owning a feed and tack store. Donny told me, “That’s where we really learned how to work. It was really hard work, toting the 100-pound bags, mixing them, and making the feed bags.”

He said, “We didn’t have the equipment we have now, and we had to do a lot of hand digging and breaking pavement and concrete, and my job was to run the jackhammer.” Donny was under the supervision of a gentleman by the name of Dwayne Cotton who most folks just called “Cotton”. Cotton was a foreman when Donny started at Nashville Gas and they became good friends. Donny said, “I had been working there for about two weeks and Cotton came up to me and asked how I was doing, so I asked if they were going to stop every morning to get us something to eat. ‘Are we going to stop every day to eat lunch?’ And he said yes, so I said, ‘I know I’m going to make it just fine.” After six months of being on the job, Cotton was promoted to supervisor and because of Donny’s hard work and how well liked he was by his bosses and peers he got promoted to the now-open foreman position. Donny continued to work underneath Cotton and he said, “I was fortunate because there was a lot of growth in Nashville which meant Nashville Gas was growing too.”

In his new role, Donny got his first introduction to damaged gas lines. He and his crew of men, usually three to six employees, repaired the damaged lines. This was in the early days of Tennessee One-Call System and not many excavators were using one-call to place locate requests. “It was rough out there; everyone was just digging through utilities and they had no relationships with anyone they worked with.” Excavators were tearing up gas lines faster than crews could fix them. “We would get one line fixed and have to run to another damaged line,” Donny tells me, “Those were long days. We were having to work 10 to 12 hours a day just to keep the gas flowing safely and that frustration lasted three to four years.” Donny and his men grew tired of having to repair damaged gas lines caused by excavation without a locate request and Donny got a great idea from the telephone company, BellSouth at the time, now known as AT&T. The idea was to start sending excavators a bill when they damaged their gas line without having a valid one-call ticket. Donny took this idea to both Cotton and Bobby Garner who was the superintendent. Donny suggested, “Hey, let’s cut out the good ol’ boy system and let’s start billing these folks for cutting our gas lines.” Nashville Gas agreed to start billing excavators for damages.

As Donny’s priorities shifted to damage prevention, his relationship grew with Bobby, who was also one the board of Tennessee One-Call. Bobby brought Donny to different industry meetings with excavators, other utilities, and locators. He introduced Donny to Bill Turner and Kathy Quartermaine with Tennessee One-Call System, now known as Tennessee 811. At these meetings, Donny got familiar with the other stakeholders and would exchange contact information with those folks. He knew these meetings were very valuable and he knew if he could get excavators to call in locate requests then Nashville Gas would have the opportunity to locate their gas lines. Donny said, “First thing, the excavators are less likely to hit your line, when they know where it’s at. Those excavators did not like having to deal with damages. Secondly, you can start building relationships with these guys and help each other out.” I asked Donny how he started to get excavators to come to some of these meetings that he was attending. He told me, “I started communicating with them and that opened up many opportunities to teach them about the importance of calling Tennessee One-Call. Many of these guys did not know that one-call existed. This opened the doors to start teaching about the dig law and our natural gas safety.”

Donny got Tennessee One-Call’s Kathy Quartermaine involved to help with training and one program that was successful was the gas safety training they did for the Nashville Fire Department. Donny received help from a coworker named Roger Byrd, who Donny says is exceptional when it comes to computers and building PowerPoint presentations. “I knew Roger was really sharp with computers. We would go out in the field to take pictures and those pictures would tell me what I needed to say during my presentations. We also took short videos and Roger would put together a presentation for me.” Years later, Donny incorporated Craig Ingram from Tennessee 811 to help with these safety trainings.

Later, Piedmont Natural Gas acquired Nashville Gas and Donny and the gas employees continued to build relationships with different stakeholders under the new company name. Donny told me that not only did Piedmont offer to do free safety presentations, but they would buy breakfast or lunch for those attending the class. Again, the networking piece of exchanging contact information was crucial to this process.

Donny’s damage prevention program was well received by the corporate folks at Piedmont, which also has facilities in both North and South Carolina. The Nashville office damage numbers were down, and Piedmont started sending Donny over to the Carolinas so he could share his program with his peers.

Donny kept adding to his resume – not only was he involved with damage prevention with Piedmont, but he also got involved with several other associations in the industry. Donny started attending Tennessee Gas Association (TGA) events and he took a class that explained the regulations pertaining to public awareness. After taking the class and passing the test he became a trainer for Piedmont Natural Gas. Subsequently he began to teach classes at the different TGA events. Donny told me, “I can sit here and beat the drum of how good I was at my job, but it was the guys I worked with who were sold on the same ideas I was. They were tired of fixing gas lines and putting their health in jeopardy every day. They saw my vision and what we were trying to accomplish.” Donny mentioned two other names of men that helped him with the damage prevention program for Piedmont. J.P. Hooper and Dwayne Westcott learned the program from Donny and went out to start teaching these classes. “It got to be so many, I could not do them all by myself. Both guys were on board and started covering these classes. I also had my other job duties to perform outside of public awareness and these guys helped tremendously. Piedmont was so supportive, they empowered me to keep moving the program forward.”

Donny also served as the chairman for the Tennessee Damage Prevention Committee (TNDPC), a regional partner of the Common Ground Alliance, which typically meets quarterly at Tennessee 811’s office to discuss any legislation changes to the dig law, upcoming projects and any helpful information such as reported utility damages. As Donny said, “These meetings provide for networking and helps keep an open line of communication between everyone in our industry.”

Donny kept giving credit to several folks in the industry. First, he wanted to give thanks to all the fine folks at Nashville Gas and Piedmont Natural Gas for giving him the opportunity to work in the industry. “The biggest deal about the opportunities I had, were the guys I came up under. Those guys were passionate about one-call and damage prevention. When they saw the passion in me for it, they encouraged me to pursue it. The more invested I got, the more I wanted to do it.” Donny built so many wonderful relationships with people he worked with in his 37 years. “I really loved all the people I worked with. The folks at Tennessee 811, TGA, AGA, and the Common Ground Alliance (CGA). I really enjoyed going on those trips to the CGA conference.”

In conclusion, Donny shared three principles with me that made him successful in his damage prevention career: “First, you must be presented an opportunity. That opportunity can afford you the chance to network with people. Secondly, you need to have a passion or drive in what you do in your everyday life. Lastly, you must communicate with different stakeholders in the industry.” If you knew him, you know he served the industry by always thinking about building that next relationship with an excavator, emergency responder, or other utilities.

Donny, enjoy your retirement. Your contributions to damage prevention in Tennessee will not soon be forgotten and we appreciate the way you prepared a solid team of folks to pick up where you’re leaving off. Thank you for your service – we’re proud to honor you as a Damage Prevention MVP.