If You Got Non-Renewed, You Are Not Alone! 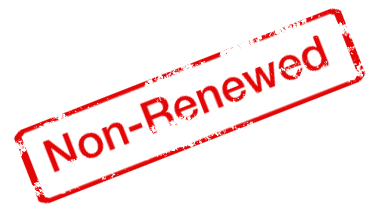 Last time, we talked about how all of the catastrophic natural events that have happened worldwide this year were paid for by your carrier’s “reinsurance” (5+billion alone from Laura and Zeta just in Louisiana!) and that most insurance rates would “probably” be going up.

HA! If it was only going to be that simple!

The big trick now is going to be getting insurance at ALL! Yes, you read that right. It’s not as though insurance was getting “Scarce” or anything – it’s just that after so many expensive hits, companies are opting to take a seat on the sidelines, so to speak.

Accounts that have had a claim or two, will probably have a more difficult time getting renewed. It won’t do any good to call the competing agent – he can only write what his companies will write – and right now, they are sending out list after list of accounts that they won’t be renewing. Some will be for claims, but others will be for types of businesses that have been determined to be “high risk” – potentially being risky – “potentially”.

Someone sitting at a desk somewhere in Outer Slobovia has decided that what your business does MIGHT be risky, they put it on a list and BAM! You get a letter of Non-Renewal. Did you have any claims? Doesn’t matter. You might. Probably haven’t. They just have decided they’re not going to write, say excavators or plumbers anymore. I might be exaggerating to make my point – but not much.

Changes that will affect how we do business over the next few years are happening all around us – and we find out when we run into them. No – no one gets a phone call that says “well, we have a “hard market” coming up and our company will be non-renewing this, this and all of those on the list we just sent you”.

As a customer, you open the mail one day and see “Notice of Cancellation, Non-Renewal or Change”. You call your agent, who’s gonna have to get “right back to you” after he calls the company – only to learn, yeah, they’re not writing that line anymore. Has nothing to do with you – but it will definitely impact you. Especially because of the prices you’ll probably run into when you find the company that WILL write your business!

Way in the back rooms of the insurance companies are a group of folks named actuaries. What they do is go over years and years of various kinds of losses, and figure out where/how their company is getting hit the worst – and where to perhaps look for future losses – and either not write those, or place deductibles or exclusions in the policy language.

Maps have been developed illustrating where the main losses are coming from – called “modeling” – and new, special rates have been applied to property located in these areas. Translated, that means that, for example, if you are located in a “high wind risk area” – you’ll now be looking at large – LARGE – deductibles for specific kinds of losses. Example – instead of a high deductible overall on your building – you might have a $500 deductible – but a $10,000 “wind and hail deductible” if you are in one of those areas.

Which means, you’ll have a $500 deductible for fire, or anything other than wind or hail, (which, unfortunately, includes lightning) – so if lightning strikes the roof – it will be a $10,000 deductible.

Never had a hail claim? Too bad. The “models” say you will. They also say, basically, “take it or leave it”.

Think long and hard before you “jump ship” and go to a different agent (assuming you can find one!)– because come next renewal, that company may not want to write either your building or your business. Every agent is in the same boat – finding coverage for customers. Period. Not pricing, coverage at all.

We had one account; OK it had some issues – but nothing too unusual. It got Nonrenewed, and after 3 months of searching for coverage, it got written – finally – at triple the expiring premium! And glad to get it – triple! They tagged it for being in a “high risk wind zone” which we never heard of the prior year – and companies would either NOT write it at all, or only if they exclude wind/hail coverage. THEN they addressed the claims (yes, they were hail claims). It was rough and this isn’t the only one, either.

We have had scenarios like this in the past – but not for at least 20 years or so. All of a sudden, certain companies will write “this” and “this” ONLY. And at this new (higher) price. Period. Take it or leave it. Never mind they wrote it before – not gonna write it this year. Crazy.

It won’t last forever – it isn’t the “new normal”. But it will definitely be the devil while it is this way. Look for things to get more normal in 3-4 years. Meanwhile, watch your claims. If you don’t have to file it – don’t. Repair those windshield chips out of pocket. I know you have glass coverage – but save that for an entire windshield. Change your thinking from “That’s why we have insurance” to “We’ll pay for this so we don’t have higher insurance premiums next year.” Except not liability.

NEVER pay liability claims out of pocket. You have to inform the company so they can handle it the right way because, you never know – maybe you really weren’t at fault after all. And even if you were, the insurance company wants to handle it their way. So, only pay property claims out of pocket. YOUR property! Not the other guy’s. Never say “Here’s a couple hundred to fix that bumper”.

Only YOUR property….talk to your agent. That’s what we’re here for!