Fact: Some People Are Accident Prone 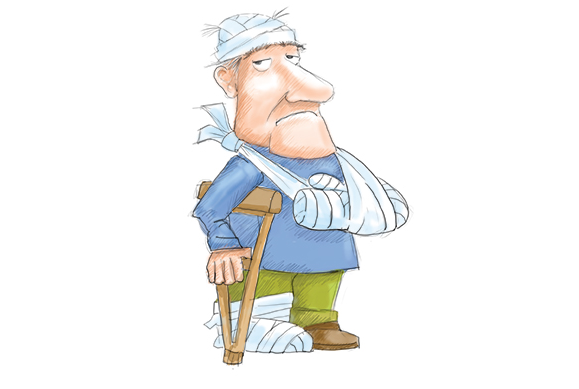 Can you and I be psychologically accident prone?

I raised this question while reading an article in which the author discussed being accident prone attributed to physical characteristics of the workplace environment.

Let me answer the question I posed. YES! A person may be psychologically accident prone and before explaining that consider the fact you and I are what we think about. What is happening in our brains virtually control our physical and psychological lives. Our thoughts determine who we are.

The attitude that if I didn’t have bad luck I would have no luck at all is, unfortunately, the default position of too many people. Without going into detail, I’ve got a relative with that attitude and fortunately he’s not working in a safety sensitive environment. His default attitude has left a trail of misfortunes in his life.

Another factor to consider is both the conscious and unconscious mind. I don’t have to walk around all day consciously expecting bad things to happen to me, because that default pattern is stored in the unconscious mind which works 24/7 below the level of our awareness. So the attitude resting in my unconscious mind is continuously impacting what I see and do.

A self-defeating attitude probably stems from a low level of self-esteem and/or self-confidence. Yes, these two psychological entities are different — self-esteem is the degree a person likes the monkey who looks back at them in a mirror and self-confidence is the “I can” attitude. Self-esteem has been characterized as the most sensitive part of our psychological makeup.

Here comes the kicker. Let’s assume I’m the owner of this self-defeating attitude while working in a safety sensitive environment. First, expecting something bad to happen actually increases the likelihood of it happening; this is often referred to the Law of Expectation or the Pygmalion effect.

Quantum physics tell us that everything in the universe is connected through energy created by giving off atoms and that is as far as my knowledge of quantum physics allows me to go. (If you want to learn more about this fascinating subject read the Divine Matrix by Gregg Braden.) So the notion is having the thought that “bad things happen to me” places that thought in the universe. Just like the ripples in a pond expand when I throw a pebble into the water, some of the ripples return to me. Hence, if I walk around the job site with this self-defeating attitude then I’m participating in a process to get hurt. That’s like shooting yourself in the foot before running a race.

Second, so I’m walking around the workplace with my self-defeating attitude expecting bad things to happen to me. That attitude may prevent me from seeing the hammer lying in the pathway until I step on it resulting in a badly sprained ankle. With my default attitude of expecting bad things to happen constantly working in the background I inadvertently forget a couple safety steps creating an incident (hopefully no one gets hurt).

Manifestation is another term used to explain how our thoughts create our reality. I’ve got a business associate that believes he is one of the luckiest people in the world. He developed this attitude as he started his career. He can cite a litany of good luck events, including being an award winning performer, which he attributes to his life-long attitude of being lucky.   The point being made is that our psychological make-up can also create positive events in our lives— even working safely.

So let’s conclude that I’m guilty. Am I stuck with this self-defeating attitude for the rest of my life? Sometime in our learning history we acquired the attitude leading to being accident prone, thus we can “unlearn” it and replace it with a new attitude. Creating this paradigm shift requires self-discipline and hard work to:

At first you feel as if you’re lying to yourself and being fraudulent. Now is the time to take advantage of another truism — fake it until you make it. Keep practicing it because your unconscious brain doesn’t know the difference between fact and fiction. If you consciously think it, the unconscious mind believes it and stores it. With practice your new thought acquires strength and eventually overrides the old default pattern. Realize that an old habit doesn’t go away; it is simply over shadowed by a new way of thinking.

Exert the necessary self-discipline to continuously practice this new thought and you will notice that your world changes as your thinking changes.

Larry Cole, Ph.D., is founder of TeamMax a consulting company that helps people work together. Please send questions and/or comments to Larry at teammax100@gmail.com.