A Deadly Wall of Dirt 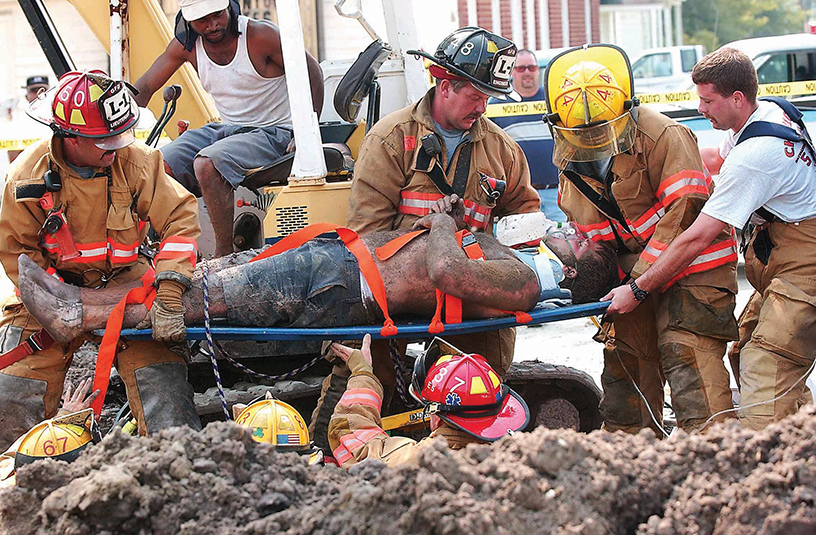 You’re at work performing your daily tasks when out of the blue a coworker pulls out a revolver. He takes all but one bullet out, spins the cylinder, slams it shut and asks you to put the gun to your head and pull the trigger. It’s nothing to him as he says, “It’s no big deal, I do it all the time!” You’re at a loss for words, your trusted coworker is asking you to do something that may or may not end your life. Crazy right? You think to yourself, “Why would I do something so stupid and crazy like put a gun to my head and pull the trigger not knowing if there is a round in the chamber?”

That scenario is from a game called Russian roulette and the harsh reality is everyday workers place themselves in danger only not with a gun, but by working in unsafe trenches. We use the analogy of Russian roulette simply because you may play that game and tempt fate all day every day for 30 years, but it only takes once. One bad day for that bullet to be in the chamber, or that trench to collapse.

According to a report from the Bureau of Labor Statistics from 2013-2017, there were 97 trenching fatalities in the construction industry—an average of 19 per year. Though those numbers have steadily gone down over the years, one death is too many.

It seems we are always hearing about a trench collapse of some form, for example, a worker who didn’t go home to his family because he was killed when he was crushed by a collapsing wall of dirt. We see the stories on the news, read about them on social media and hear the tragic news from our friends and coworkers. We are saddened, confused and angered as to why something so preventable could happen, then we go back to work. Doing exactly what killed the guy we were just talking about, because in our eyes we’re doing it more safely… “We’re only in those unsafe trenches for a second.” How long is a second? Snap your fingers—That’s how long a second is. The fact of the matter is, if “your way” isn’t OSHA’s way, you’re simply doing it wrong. And wrong is dangerous and sometimes deadly.

And why the constant rationale of why cutting corners in excavation safety is ok? It’s because we have lost the fear and respect we once had for working in excavations and we have simply become complacent. It’s because most of us don’t have a frame of reference, meaning we haven’t lost a coworker or loved one in a trench collapse. We hear the stories and go on because it won’t happen to us, right? And “workers” working in unsafe excavations isn’t simplified to construction workers, it’s also municipal workers, pipeliners, roustabouts, electricians, plumbers, horizontal directional drillers, any worker who has to dig into the dirt in the performance of their duties.

So why is dirt so deadly? I have said “crushed,” in reference to workers dying in trench collapses, because that is exactly what happens. One cubic yard of dry, type C soil, the weakest soil, weighs approximately 2700 pounds, the approximate weight of a small car. If you add water, different types of soil, rocks, or anything else to that cubic yard of soil, the weight simply increases. It is best stated that people who die in trench collapses are crushed to death.

Staying alive in trenches is so easy, yet one of the most overlooked aspects of the construction industry. Here are some tips and reminders to stay safe while working in trenches:

Trench fatalities are easy to avoid, and the collapse of a trench is never an accident, it’s always avoidable. It’s hard to defend an employer when a trench fatality has occurred because in OSHA’s eyes, a highly predictable and preventable event has occurred…and they’re right.

So, the next time you think about working in an unsafe trench, think again, because eventually there’s going to be a bullet in that gun!